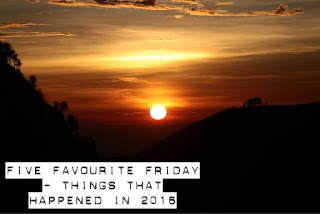 So we agreed a while back that the last post of the year would be our top 5 things that happened throughout the last 12 months.

For most people, myself included, 2016 has been the worst. The biggest thing being the amount of deaths that seem to have occurred throughout the year – celebs and family are both included in this list. And I genuinely cannot wait for 2016 to be over and to start afresh in 2017.

That being said, there have been a few good things to come of the year…

5. New Job! I got myself a new job! There were a few disagreements between myself and my previous employer regarding the hours I would be working on my return from Maternity leave. As we could not agree on what were reasonable working hours, I felt like I had no choice but to resign. After all, if I had gone back full time, I worked out that literally (and yes I do mean literally) ALL of my wages would have gone on childcare. And not only that, but I wouldn’t have got to spend any time with him at all. So I resigned. I didn’t have a job lined up and this was terrifying. I started applying for every part time job under the sun. Very quickly I got an email asking me to go for an interview. Within a couple of hours after the interview I was asked to go back and spend a couple of hours shadowing another staff member. And before I left to head home, I was offered the job! And thus began my career as a Playworker! 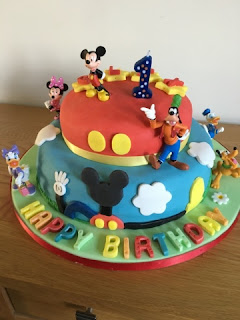 4. Alex’s 1st Birthday! I can’t believe he turned 1 this year. it feels like yesterday that we found out we were pregnant let alone celebrating a year of his life! My sister made the most amazing cake (see picture!) and we actually ended up having 3 parties in the end – one with my family, one with the in-laws and one with a couple of friends at Little Rascals (our local playbarn). I felt so lucky over the few days we celebrated and I’d like to take this opportunity to say thank you once again to all who came and wished Alex a Happy Birthday – you really are amazing.

3. Alex took his 1st unaided steps! I have been waiting for this day for a long time! In the months leading up to this point he had started getting very frustrated, and that was frustrating for us as parents! So when he took his first steps, it was such a relief because it meant he could get around by himself without needing the help of his mummy or daddy. Oh, and did I mention that he started walking on my Birthday?

And that’s it. I can’t think of another good thing to come from 2016 so I’ll be happy to leave this one behind.

Don’t forget to head on over to Tim’s blog (Broken Thoughts) and check out his top 5.

Other than that, I hope you all have a fantastic night seeing in the New Year whatever you’re doing.

I wish you all a very Happy and Prosperous New Year