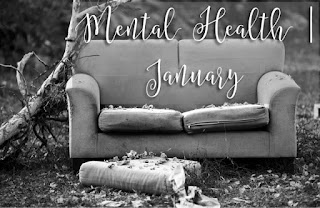 I’m full of goals and resolutions at the moment – things I want to achieve.

Top of my list for 2017 is my mental health. I’ve not exactly kept my anxiety and PPD a secret. But there’s a lot that I’ve not told anyone – that I’ve not said out loud nor written down. And I’m not sure I want to.

I’ve said CBT is working for me, and I think slowly but surely it is. But I have moments where everything I have learned goes out of the window and I have a breakdown. I haven’t had a CBT session since before Christmas and it definitely is showing in how I’m feeling.

When I started CBT, it was the anxiety rather than the depression that I couldn’t control. Since my last session, it’s the depression that is taking over, and I’m struggling to control it. Everything becomes overwhelming and it’s like a weight on top of me that I can’t move. And that when it gets too much, I don’t want to be here – in that place, in this country… on this Earth. Only now I’m stuck. I don’t want to be here… but I don’t want to leave my little boy. He literally is the only thing keeping me here.

It’s something that I have never told anyone, not a single person, before now. Why would I? The stigma surrounding mental health isn’t exactly great. People either thing you are faking, making it up, that it ‘can’t be that bad’. Or, the opposite end of the spectrum. They think you belong in a mental institution, locked in a padded room out of harms way.

I really want to push the change in stigma surrounding Mental Health this year. I believe that when you have problems with your mental health, it’s arguably more dangerous than that of a visible illness because it’s easier to hide. Easier to disguise. And far too many of us do that. Me included. I guarantee that tomorrow when I walk into my CBT appointment I will have everything that I’ve felt these last couple of weeks in my head ready to tell her. And what will come out of my mouth? “Yeah, it’s been good thanks. Not as bad as I thought”. I won’t say a single word about that drowning feeling. The exhaustion. The sheer panic. The feeling of sitting in a pit unable to climb out.

I fear I am rambling now, Getting away from the main point of this post! My goal for the year – kick my anxiety. Kick the depression. Or at least be well on my way to doing so. My goal for Januray? Survive it. Simple as that!

Sorry if I’ve rambled or bored you but I felt like I needed to get this one out there.

Hope your January is going well!