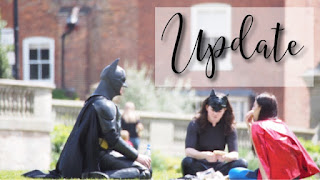 Another update! Is it just me or are these becoming increasingly more frequent? It’s not out of choice though, we’ve had a lot going on (mainly illness) over the last few weeks or so.

Let’s go back a few weeks to 18th April. During the school holidays and the only shift I worked (it was lovely). Until I went to pick Tim up from work. It started with what I can only describe as a strange zig zag wobbly line that appeared to the side on my one eye. Once that disappeared a headache quickly set in as did nausea. I had to ask Tim to drive back to Shrewsbury. Once back in Shrewsbury I was promptly sick and spent the rest of the night in bed throwing up every hour or so. After a trip to Shropdoc & an anti-sickness injection, I crawled back into bed for the night and actually managed to sleep. The following day I felt 100%. As if I had never been poorly!
Fast forward one week, back at work for my morning shift and this zig zag line appears again. Gradually as the morning goes on the pain in my head is increasing and I started feeling sick. I was sent home with instruction to call the GP. I got an appointment and went in an hour later. I spent a total of 3 hours in the GP surgery before being sent to the Acute Medical Centre at the hospital for tests. I’ve been diagnosed with migraines and prescribed anti-sickness medication, and was told to take one of those along with some paracetamol and to head straight to bed in a dark room the second that wobbly line appears. That was the end of that and I was back at work the following day.
Fast forward again another week. Back at work after the bank holiday but this time Alex had started being sick. He’d picked up the gastroenteritis virus that had been going round. I stayed home with him and went back to work on the Wednesday. Then on to Thursday. My turn to have gastroenteritis! What fun that was! My appetite is still not back to normal. And then Thursday night through Friday, Tim had the bug. So it has now made its way through my household. Fingers crossed its gone and won’t come back!

Since then and now my life feels like it’s been hectic. We’ve been to the Shrewsbury Kids Festival, we’ve had not one, but two flat tyres, I’m back at CBT and working at it harder than ever (I’ll do a separate post on that soon) and I’m now honestly looking forward to next week as it’s half term and a Bank holiday weekend.

I’m also looking forward to the content I have planned for the next few weeks and getting back into writing up our Five Favourite Friday posts again!

What have you guys been up to over the last few weeks? I feel like I’ve missed so much!