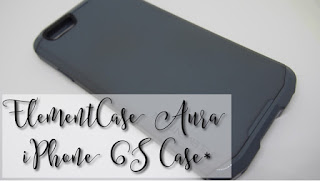 Back in March I attended BlogCon and had an absolute fab time with the girls, trying new products and speaking with different brands.

I spoke to the lovely Jessica from Bleat PR and they were showing off some technology accessories. The ones I was drawn to were their ElementCase phone cases. We were told a bit about the company and the product – including that these cases had been military tested (dropped from numerous heights, run over numerous times etc.)

While military testing is great, it’s not quite the same as as toddler testing is it? So I was sent one of their cases and immediately put it to the test! As I was putting the case on to my phone, my 2 year old became very interested and no sooner had I put the case on had he taken my phone off me! Within 5 minutes of it being in his hands it had been dropped more than 5 times (why are toddlers so clumsy with your phone but their precious teddy bear doesn’t get dropped at all – haven forbid that should land on the floor!). I was very surprised to see not a mark on the case or the screen. So far so good. One of the things I really like about this case, is the ways it feels to hold and how the buttons still feel like buttons. I know I know, that sounds like such a dumb thing to say but the buttons actually ‘click’ and you don’t have to press them hard like on some phone cases. All the ports are freely accessible as is the ‘silent’ switch.

I’m going to fast forward to now. 2 months on and the case has a couple of small marks around the edges but my phone is in 1 piece! No smashed screen, no bent phone – perfect. I am over all majorly impressed with this phone case. I have to admit to having a tempered glass screen protector which I reckon really helped but the combination is a definite winner. I can highly recommend!

The cases retail for $39.99, not overly cheap but for a good quality phone case that can survive the wrath of a 2 year old I do think it’s worth it. I’ll definitely be purchasing one for my next phone once I’ve upgraded!

They have other styles on their website too, so why not pop over and take a look!